Switch Poker is a Bitcoin real money poker app that works on any Android, iPhone, iPod or iPad.  Play No-Limit Texas Hold'em cash games on up to 4 tables at once with the multi-table view feature. Get £5 worth of credit when you sign-up.

Switch Poker is a poker room like no other in the online poker industry, as it was launched in October 2010 exclusively with iPhone, iPad and Android platforms in mind. On its own, this wouldn’t be all that remarkable, but Switch Poker is one of the few sites that offer multi-tabling functionality and boasts of utilizing a special data transmission protocol that ensures each piece of information is compressed by up to 93% in order to decrease the costs of playing on the go, which can actually get quite high in the case of mobile phone users.

As you’d expect from a mobile device oriented website, getting the Android version of Switch Poker software is extremely simple and is really a matter of clicking a few obvious buttons on the room’s website. The registration process is also simple and relatively painless, but as usual, creating a new account using a desktop computer is going to save you a few minutes when it comes to filling in all the necessary forms – unless you’re extremely proficient when it comes to writing on your smartphone.

What’s more, the site offers a unique an extremely lucrative first deposit bonus, allowing you to pick between up to €600 released in €10, a free iPod and a free iPad. As usual, you have to gather a sufficient number of Switch Poker Points to clear those bonuses within the required six months, so it’d generally be a good idea to seriously consider how much time you’re planning to spend at the tables before making the call. What’s more, Switch Poker has a really exciting Invite a Friend program and operates a number of rewarding promotions to reward loyal players, which makes it quite attractive when compared to most other sites in this respect.

Switch Poker have also added a €5 no deposit bonus that you can claim by simply registering and verifying your phone number.

Like all the other real money Android poker apps, the one released by Switch Poker keeps everything fairly simple and generally speaking doesn’t forget about the limitations of mobile devices it’s supposed to run on. Once you get into the lobby, you will be faced with a neat – if somewhat bland – list of tables to play on along with the play money, real money and settings tab. The settings tab allows you to toggle sound on and off and choose between a tablet and phone mode.

Joining any of the tables will allow you to let the cards fly and while the app might warn you that keeping more than one table open isn’t the best idea if you’re using an older Android device, I haven’t noticed any significant performance loss aside from slightly blurred card graphics. The stakes available range from $0.01/$0.02 all the way up to $10/$20 and the only poker variant available is 6-Max or Heads-Up Texas Hold’em, but complaining about the lack variety when it comes to a mobile app allowing you to grind multiple tables wouldn’t really give Switch Poker’s flagship product justice. Simply put, this piece of software bets all-in on a single feature – and if that’s what you’re looking for in mobile poker apps, than odds are high it will manage to snatch the pot for you. 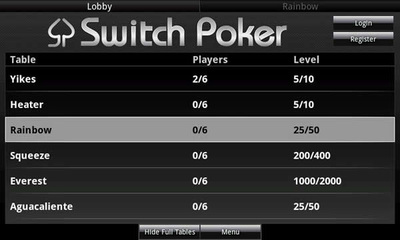 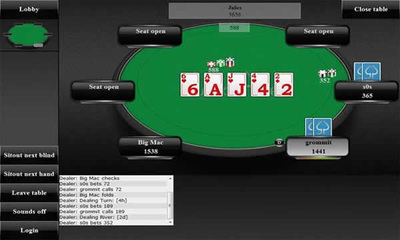 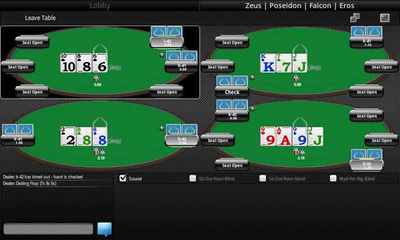 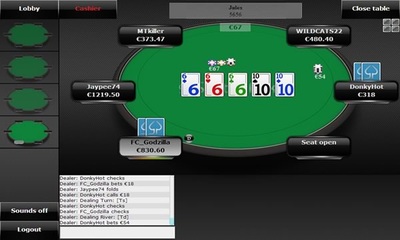 The visuals in table mode are clean, simple and extremely functional – just what you’d expect from a multi-tabling oriented mobile poker app. Yes, you won’t find any eye-candy here as everything looks extremely plain, but what matters is the fact that you can have as many as four tables open at any single time and that you have three useful vision modes to choose from, allowing you to pick between four table split-screen, two table split-screen and one table full-screen.

Aside from that, the Switch Poker client comes with some limited chat functionality, but in all honesty I didn’t find it particularly useful, since playing on four tables can really strain your multitasking abilities, even if you’re used to doing that with desktop-based apps. Consequently, the chat might be useful for players looking for a chance to kill some time instead of seasoned grinders, so you probably should keep an eye on people who seem to type too much, as they’re either playing on a desktop or aren’t really serious about the game.

This brings us to competition, which is probably one of the weakest points of the whole package. Yes, the competition is extremely fishy, which is sure to increase your potential winnings over time – especially since the rake is fairly low. Nevertheless, while the exact statistics aren’t much worse than on other small, mobile only networks, it remains a fact that the number of players doesn’t allow you to play on four full tables all around the clock.

Other sites tend to cover this problem by preventing you from playing on more than one table, but in the case of Switch Poker the lack of a sufficient player population tends to be pretty glaring at times. That’s not to say that you’re going to have problems finding games in general, it’s just that in order to utilize the full multi-tabling potential of this site, you’d probably have to limit your gaming sessions to highest traffic hours.

To conclude, Switch Poker is a great attempt at creating something new in the world of mobile poker and serves to demonstrate that multi-tabling is indeed possible on Android devices. The design, functionality and user-friendliness in general easily match what you’d expect from the industry leaders, but in the end the limited player pool and selection of the games really bring the site down and prevent it from becoming that one site everyone else looks up to. Whether you’re going to overlook this flaw or not is entirely up to you, but I’d really suggest giving Switch Poker a try if you’re even remotely interested in how all mobile poker apps are likely to look like in a year or two.  If you like to use Bitcoin for online gambling then we also think Switch Poker is best real-money Bitcoin poker app currently on the market.

Read our reviews of these other tops apps.