In September 2013, Carbon Poker became the first Merge Gaming Network site to launch a real money mobile poker app. Consequently, Carbon Poker’s software became the only mobile poker offering available to US-based players, so it should come as no surprise that the American poker community was extremely enthusiastic about the new product and assisted the company in testing the client.  Even though the app has been developed with Apple’s iPhone and iPad platforms in mind, Android mobile device owners shouldn’t have too many problems with joining the action, as long as their hardware is up to date.

The reason for Carbon Poker app’s cross-platform compatibility is the fact that it’s entirely browser-based, which shouldn’t be all that surprising if you consider how consistent Apple is about refusing to offer real money poker apps in the American version of the iTunes store. Running the client is as simple as visiting the Carbon site, but keep in mind that if you use an Android device you will be warned that your platform isn’t supported yet, and that you might experience broken gameplay. Despite this disheartening disclaimer, the software seems to work with modern Android smartphones and tablets, so if you aren’t exceptionally unlucky you should be able to log-in just fine.

However, please keep in mind that the app doesn’t allow you to create a Carbon Poker account yet, so if you’re a new customer you’ll have to register through the main website. Unfortunately, not every US-based player is welcome on Merge, as the network doesn’t accept residents of Kentucky, Maryland, Michigan, Louisiana, Washington, New York and Washington DC due to their stringent anti-gambling laws. However, if you aren’t living in one of those states, you’ll be able to grab Carbon Poker’s exclusive $5,000 Initial Deposit Bonus, which is a 2:1 match on your first payment and which can be claimed by redeeming the CARBONPK promotional code.

The new Carbon Poker software comes with a simple table browser which sports a familiar blue, black and white theme. Unfortunately, the only supported poker variants include No Limit Hold’em and Fixed Limit Hold’em, but Carbon Poker officials have already promised to implement poker tournaments with an upcoming update, which is also likely to enhance Android compatibility. The available stakes range from $0.02/0.04 to $3/$6 for No Limit games and from $0.05/$0.10 to $15/$130 for Fixed Limit Tables, but keep in mind that the only available table sizes are Heads-Up and Short-Handed. Furthermore, the app doesn’t offer any multi-tabling support, which might disappoint Android-based low stakes grinders.  No Limit Hold'em Sit & Go tournaments have been added recently that can be played at Regular, Turbo or Hyper-Turbo speeds.

The app is above average when it comes to personalizing your gameplay experience, as the settings menu allows you to switch between the traditional two color deck and an online-style four color one, toggle between two ways of confirming all-ins, and activate a number of convenient features, such as auto-post blinds, auto-muck and auto-rebuys. Even better, the Carbon Poker software is exceptionally well optimized and runs smooth even without a broadband internet connection. What’s more, the app displays your ping each time you connect to a table, which means that you’ll be able to check whether you can expect a stable game without actually taking a seat and putting your money on the line. 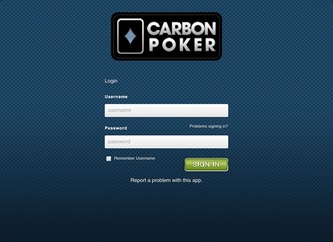 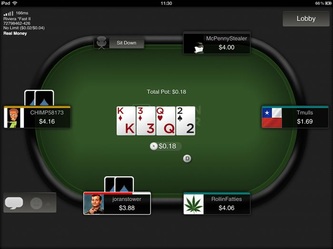 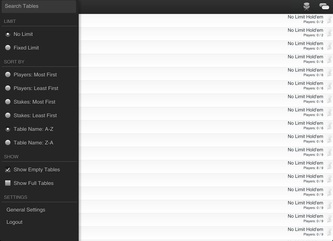 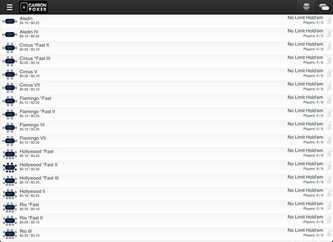 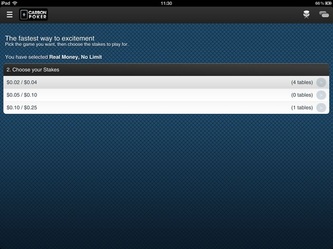 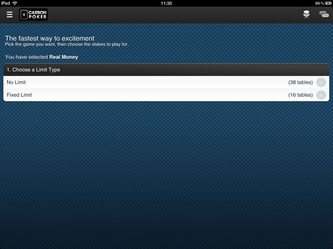 The neat features of table mode don’t end there, as the app has been designed to be easy to use even with extremely limited screen real estate. As long as your Android device is capable of displaying the app’s native resolution, you shouldn’t have any problems clicking the right buttons each time you want to raise, call, bet or fold. The fonts are easy to read and the card graphics makes it easy to tell the suits apart even when viewing the screen from a considerable distance, particularly if you’re using a four-color deck. What’s more, the app has a separate button that allows you to chat with the other players and display an extended message log, but keep in mind that expanding this tab will obstruct your view of the action, so you probably shouldn’t use it when you’re the next person to act as the action is reasonably fast-paced.

As you’d expect from a moderately popular US-facing poker network, the competition on Merge is very soft. However, please note that this also means that traffic tends to be rather low from time to time, so you might have some issues with finding opponents for Fixed Limit games if you don't plan on playing exclusively during peak hours. The rake on Carbon Poker is also considered to be somewhat high, which makes this room best suited for beginners and recreational players. Even worse, the traffic issues and the low stakes mean that even if you opt to go for a massive initial deposit, you probably won’t be clearing your bonus as fast as you’d like unless you have the time to commit to playing the games for a few hours per day.

All in all, the new mobile app from Carbon Poker is a solid product with a just a couple of minor flaws and excellent features. It is an extremely competent Short-Handed Hold’em package with some amazing visuals and smooth gameplay.  The recent addition of Sit & Go tournaments is also a huge plus point.  In the end, the new app is a great alternative for any mobile poker players in the US, particularly beginners who are not planning on making huge deposits.