﻿﻿Until recently there were no real-money mobile poker options open to United States players.  A number of U.S. poker rooms have released mobile clients that support high-speed poker, Sit and Go tournaments and Texas Hold'em and Omaha ring games on Android.

Poker players in the US can finally play real-money poker on iOS and Android phones/tablets.  More and more Android compatible poker sites are now offering players the chance to compete in tournaments or play ring games.  All of these mobile poker apps are available throughout the USA, including Texas, California, New York, Boston and Chicago.
Using your mobile device to play real-money internet poker has just got easier.  You can now play Texas Hold'em and Omaha cash games in any country without having to install an application.  These instant-play web clients offer all the same great features without the hassles.  Sit N Go and Multi-table tournaments are now also available on mobile devices, as well fast-fold poker games.  You can even play with complete anonymity in the U.S. thanks to the growing number of Bitcoin poker sites.  We only recommend real money mobile poker rooms that are totally legit and can be played legally by US citizens.

A Beginners Guide To Playing Android Poker in the United States

Mobile poker sites are evolving as fast as the hardware they run on.  The latest generation of United States friendly Android poker sites offer a wide range of amazing features, including Sit & Go tournaments, players chat, quick seating, hand histories, multi-tabling and high-speed games.  Their popularity has meant that online poker rooms that accept U.S. players have been working around the clock to develop the most advanced real money iPhone and Android sites possible.  Here are a few question you should ask yourself if you are planning to play poker on your phone or tablet in the USA. 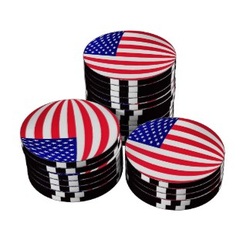 Mobile poker apps have always been a contentious issue when it comes to their promotion in both the iTunes App Store or Google Play. In the early years gambling apps were forbidden until Apple introduced geo-location tracking to iOS, which allowed them to restrict real-money gamblers to certain U.S. states.  Google initially permitted any type of sports betting, poker or casino app into the Android Market, until they eventually had a change of heart and updated their Google Play content policy to include a clause that stated "We don’t allow content or services that facilitate online gambling".

Despite this, poker rooms are starting to fight back with a cunning way to avoid the iOS, Android, BlackBerry and Windows Phone app stores altogether. The technology comes in the form of HTML5 which allows web developers to create apps that are completely web based. This means there is no need to download or go via a ‘store’ to get your app, simply type in the web address in the Chrome or Safari browser on your smartphone and it realizes you are on a mobile device.

Leading the way in this technology is Carbon Poker who have made one of the first US instant play Android poker sites. The app runs, looks and functions just the same as any ‘normal’ app and it operates perfectly even if you live in New York, Boston, Chicago or Los Angeles.