Party Poker has seen better days, as the site has been losing traffic over the last couple of years and consequently dropped a few spots in the most prestigious popularity rankings. However, with thousands of active players, the site is still far from being unpopular and the fairly recent release of a new Android poker app proves that Party is planning to regain its place as one of the hottest online poker rooms on the planet. Fortunately, whether you like the desktop version of Party Poker software or not, odds are high that the mobile package is going to impress.

If you’d like to see what Party Poker mobile is all about, the first step would be to download and install the Android-optimized app, which is available on the mobile version of the site. The hardware requirements are relatively low – in fact, the application is guaranteed to run well on any device with Android 2.1.0 or higher. Please note that the app is not available via the Android Market, so in order to go through with the installation process you’ll have to allow installation of “unknown sources” apps – the appropriate section may be found in the Applications tab in your settings menu. Furthermore, the app is rather small, so you won’t have to worry about being forced to pay a massive phone bill if you opt to get the app without access to a WiFi.

Once the app is installed on your Android device, you’ll have to sign up for an account if you haven’t registered with Party Poker up until now. The app allows you to open a new play money account, but unfortunately does not allow you to access the cashier menu, which means that playing for real money requires you to use the desktop client to manage your bankroll. Unfortunately, the Party Poker welcome bonus simply fails to impress – the room allows you to grab up to $50 with a 100% match on your payment. This means that if you deposit $10, you’ll receive $10 for free.

As expected from a brand new poker app, the aesthetics of the Party Poker Android client have been inspired by the new layout of the site. Consequently, instead of the traditional green and white menu, you’ll be faced with a neatly designed white, silver and orange user interface. Once you start up the site, you’ll be able to choose between play money tables and serious, real money play, as well as a short demonstration of the capabilities of the app. This demonstration should give you a good idea how exactly the table mode works, so if you haven’t played online poker on your smartphone or tablet, you shouldn’t have any reasons to worry – the new Party Poker software does an excellent job when it comes to highlighting the differences between a desktop-based and mobile poker application. Unfortunately, the available customization options are rather limited – aside from toggling the sound and vibrations on and off, you can decide whether the app should auto post blinds or not and choose between a traditional two-color card deck and an online-friendly four color design.

The game selection is fairly typical for a smartphone-oriented Android poker app – Texas Hold’em is the name of the game here, but you can choose whether you want to play standard ring games or the fast fold variation of the game, which in Party Poker’s case has been appropriately named Fast Forward Poker. Regrettably, fast fold poker is not available for play money app, so if you want to experience the adrenaline pumping action this mode offers, you’ll have to put some of your hard-earned money on the line. Once you pick your game type, you’ll have to choose between full ring, short-handed and heads-up and select the stakes that you would like to play. All things considered, the available poker variants simply fail to impress, as you won’t find any exotic games or even Omaha and Stud here. Nevertheless, there’s no denying the fact that this particular app will provide any real Hold’em fan with hours upon hours of perfectly smooth poker action.  Sit & Go tournaments are also available from any iOS or Android device. 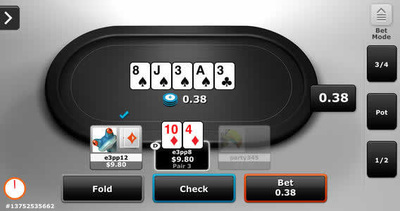 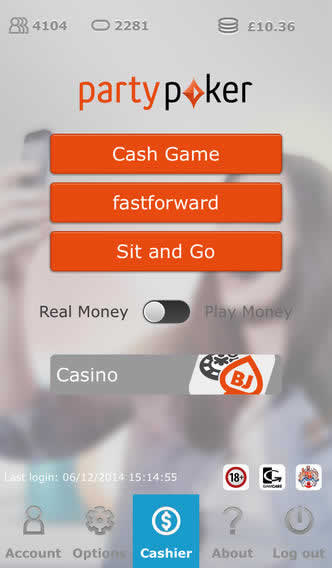 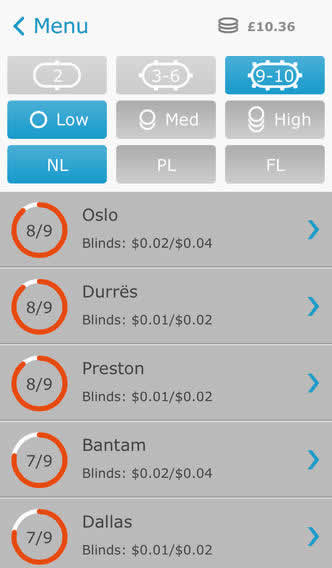 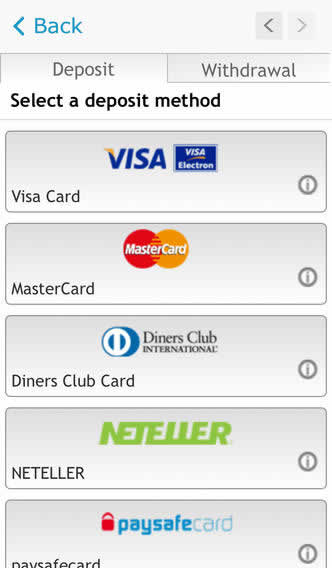 As mentioned above, the Party Poker Android app is fairly compact, so obviously you won’t find any three-dimensional models or flaring special effects once the game starts and you enter table mode. On the other hand, if you’re looking for an intuitive user interface and easy-to-read card and chip designs, the Party Poker client is definitely going to satisfy your needs. With the sole exception of customizable player avatars, it is clear that each visual element has been prepared with maximum functionality in mind, so you won’t have any problems with understanding what’s going on at your table even when you view the screen from a considerable distance.

Unfortunately, the new Party Poker Android software does not support multi tabling, which means that you won’t be able to grind more than one table at once or take part in the amazing Party Poker freerolls or pre-scheduled tournaments. However, it is worth pointing out that the app is still being worked on. In fact, each time you launch the app, your phone or tablet will automatically check for updates, which are pretty much guaranteed to expand on the somewhat limited functionality of the client. Finally, a word of caution – if you’re planning to use the Party Poker app with an unstable connection, I would advise against playing real money games due to the fact that each time you’re disconnected from the server, your current hand will be folded regardless of the size of the pot and the combination you had.

All things considered, the Party Poker Android application is an expertly crafted online poker client that offers regular ring games, Sit & Go tournaments and high-speed games, however, it would be nice if they added variants like Omaha and Stud for enthusiasts. On the bright side, Party Poker seems very serious about carving out a chunk of the mobile poker market for itself to boost the traffic in its network, which means that high-quality updates are guaranteed to follow over the months to come.
Reviews of other iOS and Android mobile poker rooms.