Terminal Poker is a web based "Speed Poker" mobile poker client that can be played via the browser of any Android, iPhone, iPad, Windows Phone, Nokia or Blackberry device.  They also offer 35% rakeback and dozens of freeroll tournaments every day.

﻿While many poker sites decided to release a special version of their client to get their share of the recent mobile gaming boom, resulting in tens if not hundreds of exclusive iPhone and Android poker apps, Terminal Poker opted to release a web browser based client.

And although this might not sound particularly impressive, the fact is that Terminal Poker accomplished something that very few other companies managed to do, and that's putting a huge number of poker variants in a neat package without giving up on compatibility whatsoever. To put is simply, the Terminal Poker mobile app is the best browser-based client available anywhere on the market right now.

As you have probably already guessed, Terminal Poker doesn’t require you to download anything to play its brand new Speed Poker variant, which was developed with mobile users in mind. Like with most browser-based apps, the compatibility is quite impressive as the app operates pretty much the same way on iPhone, iPad and Android devices. The tradeoff here is that the app feels a bit more clunky than stand-alone applications, but it’s definitely not a deal-breaking issue.

The registration process is fairly simply and as usual, I’d advise going through the whole process on a desktop PC, as typing all the required information on a cell phone can get pretty frustrating at times.

New players at the site enjoy a welcome bonus, which is a generous 200% up to €400 on your first deposit. Even better, the site has an interesting and rewarding loyalty program, so the decision to choose Terminal Poker over other, more popular platforms definitely has a lot of going for it.

As mentioned above, the entire app feels somewhat clunky, which is a common problem with browser-based clients. The lobby makes it immediately clear that the app wasn’t designed with only poker in mind and the Sports and Casino buttons give testimony to that. Aside from choosing a game, you can familiarize yourself with Terminal Poker’s terms & conditions and privacy policy, deposit and withdraw money and view your transaction history. Fortunately, the site supports most of the popular choices like Skrill (formerly Moneybookers), Visa/Mastercard, Neteller and Paysafecard and all transactions are handled in a professional manner.

The poker lobby allows you to choose between cash and tournament games, which is something you wouldn’t expect from most mobile-dedicated poker apps and is all the more stunning since poker is only one of the options available here. Even better, Terminal Poker allows you to play No Limit Hold’em as well as Pot Limit Omaha, which gives it a significant edge over the competition as most sites offer only one variant of poker and seldom include the possibility of taking part in tournament play.

Those of you who simply want to enjoy poker without risking your money will undoubtedly be disappointed by the complete lack of any play money options – on Terminal Poker you either play for real, or don’t play at all. This rather nasty problem is somewhat mitigated by the fact that you can still take part in a substantial number of freerolls, but it’s still hard to understand why such a basic functionality was omitted, especially in a mobile app. The chance to learn the game and the interface without risking your money is crucial on a mobile device and unfortunately, Terminal Poker makes going through the process rather painful.

The customization options are fairly standard, as you can choose your avatar, toggle between visible and invisible avatars, toggle sound on and off, and choose between a traditional 2-color deck or a fresh 4-color deck. Even though the design of the cards make telling spades from clubs and hearts from diamond easy, I strongly suggest rolling with a 4-color deck – especially if your device is suffering from a rather small screen size. 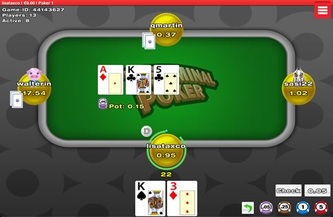 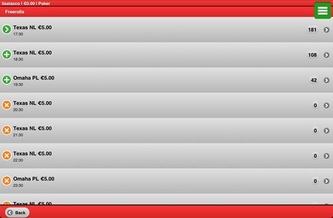 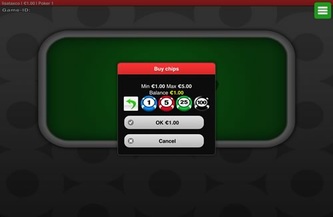 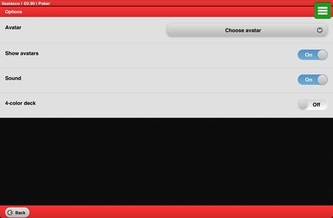 What saves Terminal Poker from being yet another uninteresting, mediocre poker site is the table mode, which is surprisingly smooth and accessible even for players with limited poker experience. The layout is well designed and aesthetically pleasing, the buttons are easy to use and basically you won’t ever feel like you’re losing out on an important feature when using this software package instead of an app from a different company.

As you’d expect from a small poker room that’s far from topping the charts in terms of popularity, the competition on Terminal Poker is extremely soft and it’s quite easy to outplay your opponents even if your poker skill-set isn’t fully developed yet. This makes the lack of a play money  option somewhat easier to swallow and actually makes the site easy to recommend for beginners and intermediate players. Be warned though that you will meet a limited number of total nits here, but fortunately, unlike other mobile poker apps, the one introduced by Terminal Poker allows you to choose which table you want to play at, making table selection relatively easy when compared to other mobile applications. Unfortunately, like in other mobile poker apps, there’s absolutely no multi-tabling function of any kind, though this shouldn't come as a surprise to you if you've ever had to deal with similar software in the past.

While the Terminal Poker mobile app has its share of problems stemming mostly from the fact that it’s web-based and isn’t exactly a piece of dedicated poker software, if you can look past that you will discover a surprisingly competent product with the functionality most other mobile poker apps can’t match. Yes, the games might seem rough around the edges at times, and the app may lack any play money option, but on the other hand Terminal Poker is 100% safe and reliable, and there aren’t all that many mobile poker apps that allow you to play Omaha tournaments wherever you go. Definitely worth at least giving it a try with a freeroll, and see where that takes you.

Reviews of other real money apps.