USA ANDROID POKER ROOMS
Unfortunately, the Sky Bet poker app has become increasingly unstable over the past the couple of updates.  Until they have fixed the major bugs in their Android software.

More and more poker players are choosing to take to the poker tables while they are out and about, thanks to recent improvements in mobile devices and the reliability of 3G/4G and wireless connections. Even smartphones have screens big enough now to comfortably allow players to take in a few Hold'em hands while they are sitting on a bus or awaiting the buzz of a dentist's drill. The UK's number one commercial broadcaster, BSkyB, have jumped onto the mobile poker bandwagon by releasing a version of their poker client for Android-enabled smartphones and tablets, although Google Play's restrictions on gambling content means the “app” is a mobile-optimised version of the SkyPoker website.

Google Play is still standing firm in not allowing gambling apps within their virtual store, which means gambling apps usually have to be installed via a downloadable .apk file, or via a browser as an HTML site. Sky have gone for the latter option. To use the mobile site, you just need to log into your Sky Poker account (or set one up if you don't already have one) via a browser on your mobile device. You will be automatically transferred to the mobile site. The site should work on all mobiles with Android 3.2 and upwards.

If you're new to Sky Poker there's an exclusive “newbies” deal just for you - £10 free and a 200 percent first deposit matched bonus up to a maximum of £500. As always, such deals come complete with conditions. The £10 actually consists of four Sit & Go tournament tickets: 2 x £2.20 tickets and 2 x £3.30 tickets. The tickets can be combined to provide entry to more expensive tournaments if you so wish. Your deposit bonus is released in £10 chunks every time you amass 250 poker points while playing at Sky Poker. You earn six points for every £1 earned playing ring games, and ten points for every £1 you spend in tournament fees – both MTTs and Sit & Gos. You have 30 days from being awarded the bonus to claim as much of it as you can.

Note, the Sky Poker Android app is only available to players in the UK, Ireland, Gibraltar, the Channel Islands and Finland.

When you've logged into the website, you can pick from three poker variants, namely Hold'em, Omaha (Hi) and Omaha Hi-Lo. Oddly, there are no tables with more than six places available – indeed you can only play 6max or Heads-Up. Players looking for 9max or greater will need to play on the desktop site.

You have two ways of finding a suitable table at which to play. You can find your way into the Sky Poker lobby and browse around the tables that are available. The browser function within the app is actually pretty neat. Alternatively, you can just set up your game type, table type (6max or HU) and stakes (Micro, Low, Medium or High) then press the large pink “Play Now” button. The app will then find a free table for you which matches your chosen criteria, and you can choose to be seated if the table is to your liking.

The app still has some issues – the biggest being that the whole poker experience via mobile is conducted in complete silence. This is a bit of an issue if you want to play poker while doing something else as well, as you need to alerted when it's your turn to act. Additionally, the poker client is not yet optimised for tablets, and players have complained that once you enter a MTT or Sit & Go via the app it can be hard to actually get to and sit down at the table.

Sky say they are working on these issues, but you can't help but feeling they would have been better placed to make a more functional app before releasing it to the poker playing public. 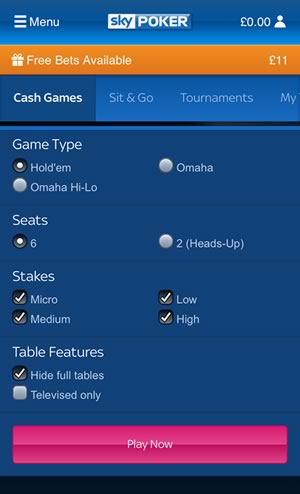 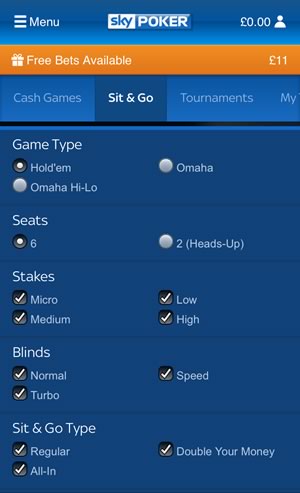 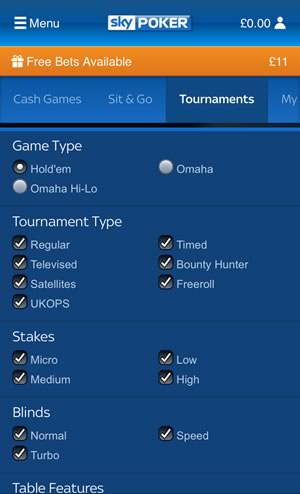 You can multi-table via the app, but Sky Poker currently doesn't recommend that you do, due to the lack of an audible table-notification when it comes to your turn to act. This means you have to constantly browse through your tables to keep up with the play on each of them.

The table display is fine, and the fact there are only 6max and HU tables available means that the table display never becomes cluttered. The cards are easy to see and if you are playing on a smaller mobile screen you can switch to a four-colour deck. The interface is less easy to use on smaller mobiles, particularly if you want to micro-manage your bets down to the exact cent. Players on mobile screens may have to be content with the default options of ½ pot, ¾ pot, pot and all-in as even small fingers have difficulty in using the bet-size slider, which can lead to random bet values being played.

The game play is pretty slick, although there is just a hint that the players are a little slow to react. Some players have complained of more bugs, such as the first round of betting started without the cards being dealt, and the app freezing completely at times. Again, a little more beta-testing might have been a good idea from Sky before the app was released.

One other point – once you're seated at a table you cannot “nip back” into the lobby without quitting the current table you are playing at.

If there's one reason for an experienced poker player to download the app and see a few hands it's the low quality of the opposition at Sky Poker. Sharks have admitted they love to chow down on the fish at the site. Expect to see some odd pocket cards being played, and high “starting hands played” percentages. It's thought that a large percentage of poker players at Sky Poker are players from Sky Bet who are trying their hand at poker while they wait for the next race to start or the big match to kick off. Noon to 2pm GMT is a good time to terrify some fish.

On the other side of the coin while the Hold'em ring games at Sky have plenty of players, the MTTs, Sit and Gos and Omaha variants do not. If you are looking for anything other than ring games, then you'll probably find Sky Poker a little frustrating.

It seems clear that the Sky Poker app for Android has been released before it ought to have been, with players finding bugs and even Sky admitting inadequacies. If Sky Poker is your poker room of choice, then of course you are going to want to download the app and enjoy some pre-flop raising while you're out and about. Non Sky Poker players might be better off waiting until these many bugs have been zapped before considering Sky Poker a legitimate choice in the mobile poker market.

Reviews of other iOS and Android mobile poker rooms.