SealsWithClubs is a Bitcoin only online and mobile poker room that welcome players from the United States and EVERY other country in the world.  Choose to play Texas Hold'em or Omaha.  Mobile poker tournaments and freerolls now also available. Cashout in hours.

BITCOIN MOBILE POKER GUIDE
SEALS WITH CLUBS HAS NOW CLOSED
Despite the closure of Seals With Clubs, mobile poker fans can still play bitcoin poker on their smartphones or tablets. welcomes U.S. players and offers Hold'em/Omaha ring games and tournaments.

Seals With Clubs is pretty much the only bitcoin poker room that attracts enough traffic to really warrant signing up for an account, so it’s quite fortunate that the site offers an amazing Android app, which has recently been updated to include tournament support. The overall quality of the Seals With Clubs mobile product is quite on par with major network software packages, allowing you to experience anonymous bitcoin poker without sacrificing anything in terms of gameplay in return. If you’ve ever been even remotely interested in playing on a bitcoin site on the go, you’d be doing yourself a disservice by not giving the latest version of the Seals With Clubs Android app a try.

Downloading the Seals With Clubs Android software is very easy, as the app is readily available on the room’s website. Unlike the other poker sites that cater to American players, Seals With Clubs provides you with a downloadable client, which means that the action is significantly smoother than in the case of most browser-based apps and that you won’t have to deal with any annoying loading times.

Furthermore, it is worth pointing out that while you have to register at the site in order to deposit bitcoins and join the action, Seals With Clubs won’t require you to provide the room’s staff with any of your personal information. In fact, you don’t even have to give them your e-mail, but if you opt to do that, you won’t be able to recover your password if you forget it later on. All things considered, Seals With Clubs is pretty much the only trustworthy poker network that guarantees complete anonymity.

As you’d expect from a site that doesn’t keep track of the personal information of its customers, Seals With Clubs does not offer any traditional first deposit bonuses. However, the site offers plenty of exciting freerolls and premium tournaments - and if that wasn’t enough, the rake is among the lowest in the entire industry. In fact, sometimes it’s possible to play almost rake-free by taking advantage of the table starter promotions offered by the site.

While the Seals With Clubs Android app won’t impress you with any flaring special effects, there’s no denying the fact that all the menus are well designed and aesthetically pleasing. The visual theme is mostly a mix of black, green and white, which is an excellent choice for the limited screen real estate of most compact mobile devices. The app allows you to customize your experience to some extent, as you’re free to switch between a traditional two color deck and a modern four colored one or to toggle an option that automatically ensures that you never show a winning hand. In addition, the app allows you to mute chat and popup messages, which is usually a good idea unless you really care about the social aspect of the game.

The app supports Texas Hold’em and Omaha in both limit and no limit variations, which should please all the poker enthusiasts who are simply getting tired with all the Hold’em-only clients flooding the market these days. The stakes range from micros to the equivalent of NL50, which shouldn’t be all that surprising for a bitcoin-only site. Furthermore, the app won’t force your hand when it comes to picking the table size, as both short-handed and full ring games are supported. As briefly touched on above, the app gives you access to a wide range of tournaments, but keep in mind that this feature is still in the testing phase which means that it may have some bugs that haven’t been reported and fixed yet. 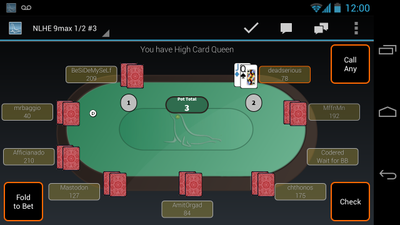 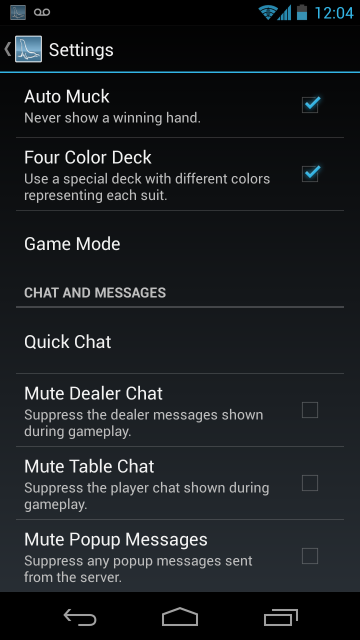 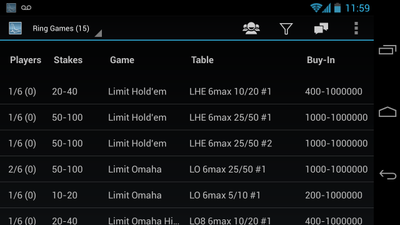 The Seals With Clubs Android app gives you full control over which tables to join and doesn’t rely on any annoying matchmaking system, which means that you’ll be able to watch the action before actually putting your chips on the table. The table mode is well-designed and very functional, so you shouldn’t have any problems with reading the situation in your game as you’re planning the next move. The buttons are conveniently placed in the corners of your screen, which goes a long way when it comes to preventing potentially costly mistakes. The card designs are rather simple, which makes it easy to tell the suits apart even when you’re using the classic two color deck and viewing the screen from a considerable distance. In addition, the app provides you with the information on how strong your hand actually is throughout all stages of the game, which is a neat addition for inexperienced players and casual poker enthusiasts.

Even though the traffic on Seals With Clubs is rather low when compared with major network sites, finding some action shouldn’t be much of an issue with 250-300 cash game players online during peak hours. As you’d expect, No Limit Hold’em is the most popular game here, but Pot Limit Omaha tables aren’t all that hard to come by, especially at the lower stakes. The competition on Seals With Clubs tends to be very soft, as the traffic isn’t really high enough to attract professional grinders and hardened poker veterans. Consequently, Seals With Clubs is an excellent choice for recreational players and beginners who are looking for a site that would allow them to learn the game without actually having to disclose any sensitive personal information.

Seals With Clubs is the only site that allows you to play real money poker while enjoying complete anonymity, but the advantages of playing on this network using your Android device don’t really end there. The Seals With Clubs mobile app gives you access to poker variants and game modes that aren’t really available with the other poker rooms while offering some of the best rakeback offers in the industry. In the end, the only downside of picking Seals With Clubs over one of the traditional poker apps is the lack of welcome bonuses and reloads, but you shouldn’t really expect promotions of this kind from any bitcoin-only site.
NEED A U.S. POKER APP?  CLICK HERE

Don't want to use Bitcoin?  Read our reviews of these other great poker apps.