DOWNLOAD USA POKER APPS HERE
PKR POKER HAS CEASED OPERATIONS
We regret to inform you that PKR poker has closed.

While Android poker apps tend to differ in terms of the offered games, available stakes or traffic, they all have one thing in common – they depend on virtually the same, two-dimensional set of rather abstract graphics to let you know what’s going on at the table you’re playing right now. PKR has assumed a different approach, introducing 3D backgrounds and player avatars to create something in between a normal live game and traditional online poker. This new style of playing poker has long been available exclusively to desktop users, but the new generation of smartphones has finally made the port possible and PKR didn’t take long to release the first truly 3D interactive poker app.

As you’d expect, the hardware requirements of the PKR mobile Android software package are extremely steep. For starters, the download size is 400 Mb, which doesn’t even begin to compare with other clients that tend to weigh less than 10 Mb. As a result, downloading the app without an access to a fast internet connection is simply an exercise in frustration. Running the PKR 3D client on an Android device with lower specs than the minimal provided by the developers also isn’t the best idea, as the performance will be lackluster – that is assuming that the app will start up at all. Nevertheless, if you have the hardware necessary to run this monster of a poker client, you’ll quickly realize that the entire download and installation process is exceptionally simple and doesn’t require a lot of input from you at all.

PKR now also offer a 2D version with identical features but in a 2D gaming environment.  The install file for the Android, iPhone and iPad 2D PKR app is only 50MB.

That is not to say that the only advantage of playing on PKR is the possibility to marvel at the wonders of modern 3D graphics, as the site offers generous welcome bonuses specifically tailored to suit players with different backgrounds and expectations. Novice players can take advantage of the free $5 Starter bonus, while experienced players have the choice between a 100% match $125 first deposit Intermediate bonus and a 150% match $500 first deposit Advanced bonus, which requires you to make a payment exceeding $150. The remaining free goodies include tournament tickets, freerolls and a lucrative refer a friend program which is beneficial both to you and the person you decide to introduce to the site.

Once you install the PKR Android poker app, you don’t even have to create an account on the site to check out the games, as the client allows you to get to the good stuff without logging in by clicking the Browse as Guest button. The lobby is well designed and allows you to toggle between real and play money games, pick between instant play, cash games and Sit & Go tournaments and gives you access to various customization options, which include picking between two- and four- colored deck of cards, adjusting the sound options and so on. What’s more, unlike other poker apps, PKR provides you with an extensive Rules section, which lists all the information you might need to begin playing one of the poker variants supported by the app. Obviously, this tutorial doesn’t really compare to what dedicated learning sites have in store – but in the end it’s enough to allow anyone to play the game without feeling lost or confused at the table. Another neat touch is the fact that when you switch from Play Chips to Real Money mode, the buttons and the background change colors, making any potentially costly mistakes downright impossible.

What’s more, the available poker games are more varied than with most other Android poker apps available on the market these days. The main picks are Pot Limit Omaha, Pot Limit Omaha Hi/Lo and the most popular poker game in the world – No Limit Texas Hold’em. All those games are available in both cash and Sit & Go versions and can be played heads-up, short-handed or full ring. The available stakes range from the low $0.10/$0.25 all the way up to high $5/$10, which is quite surprising if you consider the fact that PKR is widely regarded as a recreational poker site rather than a high-roller paradise. All in all, PKR offers a surprisingly complete package which definitely prevents the app from being a one-trick pony with no substance to back its excellent graphics. 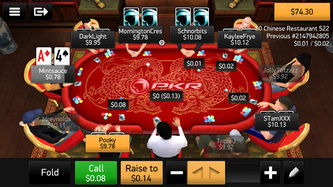 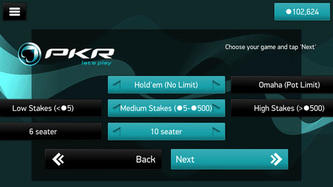 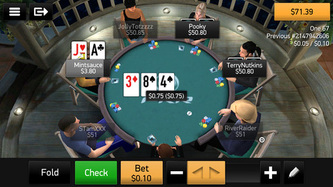 ﻿So, to make a long story short and answer the question you’ve probably been asking yourself since the beginning of this review – is the 400 Mb download really worth it? Fortunately, the answer is an emphatic yes. The avatars which are used to represent the players at the felt are wonderfully animated and fully customizable, each of the characters has a unique voice and as a result, the entire experience is significantly less impersonal than what you’d expect from an online poker game. Unfortunately, this level of immersion comes with a price, as the PKR 3D Android poker app doesn’t allow you to play at multiple tables at once – and given the fact that introducing this kind of functionality would be at odds with the overall concept of the site, it’s highly unlikely that the company will allow it in the future.

Fortunately, playing on PKR can get exceptionally lucrative even without grinding multiple tables at once, since the competition is very soft. Simply put, the site is populated with recreational players and various kinds of fish, so if you’ve ever played poker seriously you’re going to have a field day here. Even if you’re a complete newbie, PKR provides you with a rather safe environment to learn, experiment and develop your poker skillset without losing your bankroll over and over again. The downside of that is the fact that the traffic can get somewhat low outside the rush hours, but if you aren’t a high-stakes player you shouldn’t have any problems with finding a suitable table to play even late in the night or early in the morning.

Graphical bells and whistles aside, the PKR 3D Android poker app is a surprisingly well-rounded piece of poker software which can easily hold its own against the apps developed by industry giants. The level of functionality available here is definitely closer to a desktop-based client than a typical mobile app, so if your mobile device is up to the task you should definitely consider giving PKR a try.

Read these other poker app reviews.